The Gold Coast Philharmonic Orchestra with Conductor Mark Turpin completes the 2012 concert
season with a concert designed for music lovers of all ages, “Star Bright”.

Two wonderful Gold Coast based musicians will have the honour of being the recipients of the now annual Youth Concerto Performance Opportunity but with a bit of a twist!

Liam Cruz is a Gold Coast born musician, who plays Trumpet and French Horn but has a great interest in conducting in the future so Mark Turpin has invited Liam to conduct a work for the Star Bright Concert. Liam has chosen Highlights from Jurassic Park by John Williams.

Mikayla Southam has lived all around the world and has recently made the Gold Coast her home and the Orchestra is delighted to feature her, performing a beautiful violin showpiece “Scene de Ballet” by De Beriot.

Concert Master of the Gold Coast Philharmonic Orchestra, Margaret McAteer says “this program has been designed with children in mind and the orchestra will bring to life the importance of making music fun. Many musicians start playing at an early age and study for years to achieve the high standard of playing we hear in our orchestra. Children are amazed that Mozart was composing and performing as a child and we are featuring one of his works that many kids know well having played it from the music textbooks”.

Conductor Mark Turpin explains “With the Gold Coast Philharmonic Orchestra being made up of all local musicians who enjoy playing, performing and being challenged themselves, they also love nothing more than inspiring younger musicians and entertaining all ages and this program has everything from Brahms’ Academic Overture and the Waltz from Tchaikovsky’s Sleeping Beauty, great movie themes to testing the musician’s woodworking skills with Leroy Anderson’s Sandpaper ballet – yes with real sandpaper being used as an instrument!”

With all Robina Auditorium (formerly the Robina Community Centre Auditorium) concerts, the friendly atmosphere is everywhere with opportunities to meet and mingle with the musicians, soloists and Conductor before the concert and at the interval.

The Orchestra has a special arrangement with the Exhibitors of the Robina Art Gallery and we again present a pre-concert event with complimentary wine and cheese on Saturday 1 December
from 6.30pm for our Friends of the Philharmonic members, sponsors and special guests. This is a great opportunity for our Friends to meet the Conductor, Concertmaster and soloists before the concert and view the art works on display.

Tickets can be booked at The Arts Centre Gold Coast Box Office in person, by phone 5588 4000 or online here.
Adult $25, Concession/student $22, Friend of the Philharmonic $18, Children under 12 FREE (when accompanied by a paying ticket holder, max 3 children per ticket).
Includes refreshments at interval. 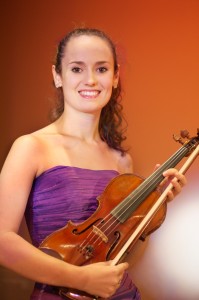 Mikayla began studying violin at age 6 with Shelley Rich and Janie Bionaz at the Northern Arizona Preparatory School. From the beginning, Mikayla (and her violin) loved playing with other musicians and at age 10, she joined the Flagstaff Junior Symphony as concertmaster. After moving back to Canada, Mikayla studied with Sandra Stark and Mel Martin and played first violin in the London Youth Symphony. As a high school student, Mikayla received scholarships to attend the Interlochen Centre for the Arts and Kincardine Chamber Music Program and was on staff at the National Music Camp of Canada. At university, Mikayla played in both the symphony and chamber orchestras and in the pit for the annual opera production. Mikayla moved to Australia the day after she graduated from the Don Wright Faculty of Music, Western University Canada and immediately joined the Gold Coast Philharmonic. Mikayla is currently studying anatomy at Bond University and aspires to become a physiotherapist with a focus on helping musicians avoid repetitive strain injuries and help them play beautiful music for their entire lives. De Beriot’s Scene de Ballet is a very special piece to Mikayla because it combines her two passions; music and movement. She hopes that this performance will encourage you to dance a little in your seat. 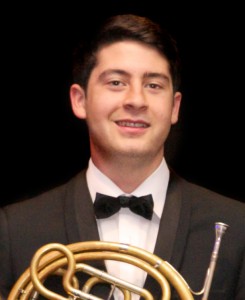 My passion for music began at a young age where I was constantly surrounded by music, as dad played classical music on the morning radio and mum played jazz in the afternoon. In grade 5 I began playing trumpet at school, where it became immediately apparent that music was going to be a large part of my life. Throughout my trumpet playing time I got lessons from various teachers such as; Alex Tronza, Craig Davidson, Jamie Ashe
and Jeremy Williamson, all who greatly inspired me in many different ways! Towards the end of grade nine, I was introduced to the French Horn which led me into getting lessons from Ysolt Clarke in Brisbane.

It was around this time that I discovered my passion didn’t lie simply in playing Horn, but more so in conducting. Throughout grade 12, I was given the roll of concertmaster at Benowa High, which gave me the opportunity to conduct the wind orchestra every so often. After having conducted an orchestra I was sure that someway or another, this is what I wanted to do in life. Since then I have done my music extension practical exams in conducting, receiving a very high achievement, assistant musically directed “Suessical” at the Spotlight Theatre and have been given the opportunity to executively musically direct “you’re a good man Charlie brown” which will be the Spotlight Theatre’s opening production in 2013.

I have chosen to conduct Jurassic Park arranged by Calvin Custer, as this song highlights and showcases diverse conducting techniques and is a song which I am very attached to. Having played this arrangement before, I would like to personally say how honored I am to be conducting such a beautiful piece of music in front of such a talented group of people. 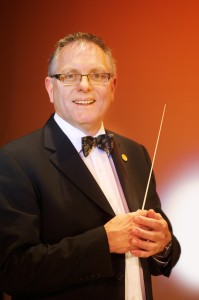 Queensland born and educated, Mark Turpin has been involved with the Gold Coast Philharmonic Orchestra as oboe player since 1987 and as conductor since 2000. He has conducted the Gold Coast Philharmonic Orchestra in over 30 concert programs. Mark was awarded a place in the 2005 Symphony Australia’s Conductor Development Program and had the pleasure of being one of 14 conductors in Australia to work with renowned conductor Graham Abbott.

Mark is the recipient of the Gold Coast Honours Awards, Entertainment section in 2009 and has accepted, on behalf of the Orchestra, the Cultural Achievement Award nomination at the 2006, 2009, 2010 and 2011 Australia Day Awards. Currently Mark is Head of Music at the Queensland Academy for Health Sciences.